Lateralized visual processing in cattle herds - why is there a “near side” and “off side” for human-animal interactions? (#496)

When challenged individually or in small groups with novel visual stimuli, domestic horses and cattle have been found to possess a significant preference to use the left eye (right brain hemisphere) to first inspect and cognitively process the potential threat [1-4]. By contrast, familiar, non-threatening stimuli are preferentially viewed with the right eye. These forms of lateralized visual processing correspond with similar studies in other mammals, birds and reptiles, and reflect lateralized control of the autonomic flight/fight system in vertebrates. However, the findings present a paradox to traditional handling methods of haltered livestock, in which their left flank is referred to as the “near side”, and right flank as the “off side”. While common interpretation of the origin of these terms relates to the right-handedness of the human rider, bullock-train or coach driver, we present here new findings of visual preferences in cattle suggesting how livestock may tolerate a novel human on their immediate left, and not right, side. Results from a series of approach tests of 18 pens of cattle feeding in large groups of 90-120 head reveal that cattle are initially more likely to take flight when the human is unable to be viewed with the left eye. Approach of the human from the right visual field is less well tolerated in cattle without social companions on their left side: they cease feeding and depart the feed bunk. By contrast, acceptance of the approach of a novel human is more likely when viewed within the left, and not right visual field. This is especially true of cattle with social companions on their immediate right side.  We will discuss this new finding of lateralized social cooperation in cattle herds as a strategy to mitigate the stress of human-animal interaction, within the broader context of domestication. 1 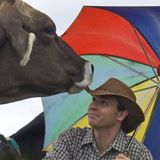 Andrew graduated with a Zoology (Ethology) PhD. in 2002 under the supervision of Lesley Rogers, University of New England, Australia. His project on lateralized visual and motor behaviours in cane toads and green tree frogs led to a number of publications in international journals, but left him with an abiding interest in lateralized cognitive processing in vertebrates. After 7 years as an independent researcher (read, "full-time home parent for 2 children), Andrew began working with Clive Phillips at the Centre of Animal Welfare and Ethics (CAWE) at the University of Queensland. Juggling various research projects funded by bodies such as RSPCA and the MLA, Andrew has nearly completed a veterinary degree with the aim of becoming a veterinary ethologist. Student member of the Australian Cattle Veterinarian and Australian Veterinary Behaviour Interest Group, he was a recipient of the 2013 Kersti Seksel Student Prize for his ongoing investigations into cattle behaviour and welfare.