Few social carnivore species forage as cohesive groups and at the same time do not share prey, but rather compete for food or access to it. Such a situation requires spatial coordination, mediated by communication not to waste energy in competition or losing contact to the group. Meerkats, Suricata suricatta, a member of the mongoose family, forage as a cohesive group with each of them searching for their own prey in the sand. They typically keep a distance of 0.5 to 20 m to their neighbor, and frequently emit close calls while foraging. These calls appear important in maintaining contact to the other group members. Through subtle changes in the acoustic structure of close calls, before they turn into aggressive growls or snarls with physical competition, they ensure a spacing distance among group members. These subtle acoustic changes are reflected by a more noisy call structure, and are typically associated with an aggressive emotional state of the caller. In addition, close calls convey information on the identity of the producer. I present data on how much of the social information is used by receivers and its effects on the spatial organization and the coordination of group movement. This communication system provides a simple, efficient mechanism to avoid aggression within competing foragers forced to stick together at a close distance, and plays a crucial multi-functional role in the group dynamics while foraging. 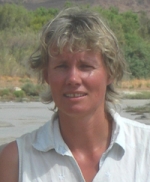 Marta Manser is a Professor at the Institue of Evolutionary Biology and Environmental Studies at the University of Zurich. She is interested in understanding animal societies and investigate sproximate and functional aspects on group coordination (leadership and group decisions) and in particular, communication and cognition in mammals. With a comparative approach she aims to identify what selective factors favor communicative complexity (e.g., vocal repertoire size, variation in call structure within call types, call combinations, etc…) and the underlying cognitive mechanisms. Her work focuses on phylogenetic closely related or sympatric living species showing variation in their social structure. Based on behavioural observations of habituated animals in their natural habitat she tests specific hypotheses with field experiments, and also on captiveanimals.